We must end this tunnel-vision approach to housebuilding

Way back in 2017, the then Chancellor of the Exchequer, Philip Hammond, announced the government’s intention to build 300,000 new homes a year. The chancellor conceded there will be no ‘single magic bullet’ to increase the supply, and indeed two years later, we are lagging behind targets.
In my opinion, the target itself is relatively modest and entirely possible to achieve with existing and planned manufacturing facilities, despite the media obsession with productivity scores.
The current blame game that seems to be going on within the marketplace isn’t helping either, the latest coming from Robert Jenrick, the Secretary of State for Housing, Communities and Local Government. His shot across the bows at Housing Associations was decidedly unhelpful and might have the effect of driving a wedge at a time when we need these institutions to help deliver on social housing requirements.
However it represents the narrow approach often adopted by Government (of all shades). We need more diversity, whether it’s architects, developers, construction methods or my particular sector, building materials.
I think an obsession with Modern Methods of Construction, in particular its funding schemes for modular houses, represents another good example of our 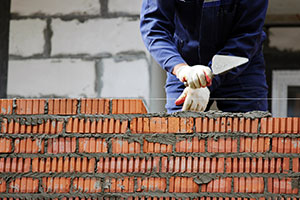 policy makers’ tunnel-vision. I feel that we need to adopt a more universal, inclusive approach. This single-mindedness is unhelpful and in my view not the panacea it is hoped to be.
On the surface, it’s perceived that modular enables us to meet targets quickly, however, if we look at the 1950s and 60s modular builds, many are no longer fit for purpose. The scandal is that these were not built very long ago. Surely we don’t want housing stock that needs renewing on a generational basis?
True, techniques have evolved since, but we need to be careful not to repeat previous shortcomings. By all means, incorporate modular into the housing landscape, but let’s make sure we use materials with longevity in mind and we don’t rush the construction.
To maximise sustainability, we should be building for longevity. Yet with the push for ‘results here and now’ puts the industry in danger of repeating the mistakes of the past. Crucially, we must not plan obsolescence into our housing; instead we should be learning lessons from this legacy of poor quality building and improving.
The preoccupation with Modern Methods of Construction weighs heavily on this, amounting to a prejudice against traditional materials and forms of construction. There’s an erroneous perception that a technique must be better simply because it is new.
But look at the mid-rises created by the Peabody and Guinness Trusts in Victorian London. A prime example of these is the Boundary Estate in East London’s Shoreditch. Built on-site, from masonry, it’s still standing and still occupied over a century later, and an indispensable part of the local community.
On-site construction which represents over 70% of our new build still has so much to offer in the housebuilding sector, and the capacity to meet our current targets. It should not be overlooked by this government, nor those which follow. Ultimately, we must not become distracted by the narrow rhetoric preoccupying the national conversation. We have so much to do to fix the housing market, we can only do this if all construction forms and methods are encouraged to contribute in the process.
Chris Stanley, Housing Manager, Concrete Block Association