Housing associations across the country are reviewing fire safety equipment and procedures post Grenfell, yet installation of new fire safety measures is not without its difficulties in high rise flats.

Minimising disruption, creating something that looks aesthetically pleasing and communicating with a diverse range of tenants all have their challenges.

One housing association in Cornwall has taken action and retrofitted a sprinkler system into the county’s only high rise block of flats, Park House. Built in the late 1960s, the 36-metre high building in St Austell is owned by Ocean Housing, and comprises 67 flats across 12 floors.

Ralph Garth, head of health and safety for Ocean Housing explains how the organisation went about a £300,000 sprinkler re-fit. He said, “Following the Grenfell enquiry and subsequent Hackitt review, it was established that Ocean Housing manages its properties well, with no significant improvements required.

“However, we take the safety of our residents very seriously and so although not legally required to install the sprinklers, we decided, particularly after concerns post Grenfell, that it was the right time to invest in and upgrade the apartment building with the latest fire safety measures.”

Sprinkler systems are widely recognised as the most effective method of fighting the spread of fire in its early stages. The installation was welcomed by tenants as a way of feeling safer in their homes after Grenfell. 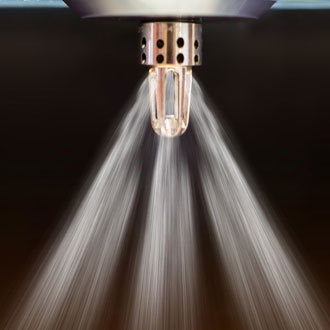 450 sprinkler heads were installed in both tenanted and leasehold flats, as well as communal spaces throughout Park House. The scheme was completed within six months, on time and within budget.

Ocean contracted Domestic Sprinklers Limited for the project, with help from subcontractors, including Aqua Source and Firecrest.

Contractors undertook work floor by floor, taking one to two days to install in each flat. Carpenters and decorators then carried out cosmetic work to ensure each flat was left in pristine condition for the residents.

An unoccupied flat was fitted with the new sprinkler system prior to the start of the project. This became a show home where all residents could gain an understanding of the work involved and how it would look after installation.

Two open days were organised for residents to view the show flat, including evenings to accommodate residents who work during the day. This was supported by a sprinkler demonstration by Cornwall Fire and Rescue, with their mobile sprinkler unit, to explain how the system would work in the event of a fire.

Contractors worked one week ahead, personally speaking to tenants to give them notice of when they would be starting work on their flat. This personal approach was used to reassure residents, and if they had any questions they could be answered directly.

Regular liaison was set up between Ocean Housing and all stakeholders, which included weekly meetings to ensure everyone was up to date with the stage of the work. This helped to build trust and rapport with the team.

Due to this co-ordinated approach between Ocean staff, contractors and residents, there were no significant issues during the project.

Communication was key in the smooth installation of the sprinkler system. Every resident and leaseholder was contacted by letter, which was followed up with door to door communication about the installation before the project commenced.

The Park House caretaker was also on site every day to answer any queries, and refer back to the project management team if required. In addition to this, all residents were given the phone numbers of project leads at Ocean Housing, so that any concerns could be addressed directly.

Installations could take place while residents were in. However, the show home was accessible to those who wanted a quiet space throughout the project. This meant they didn’t have to leave Park House during the process.

Ocean always has tenants at the heart of everything, and it was thanks to the cooperation of residents that the project went so smoothly. A £40 B&Q voucher was also given to each resident as a thank you.