Fire and safety are a constant worry for landlords and tenants, but there are some changes you could be implementing to reduce the risk of these hazards. Here, David Boultbee, Technical Consultant at Ultra LEDs tells us why LED lighting is a much safer option than other lighting solutions.

Lighting is important for any building. It improves visibility and increases home security. But some light bulbs aren’t as safe as you might think. And, with faulty wiring and electrical outlets being such a dangerous risk for homeowners and landlords, you’ll need to make sure that your lighting is as safe as possible to reduce the risk of fires and harm to occupiers. Below, I’ll be outlining just some of the ways that LEDs are a safer lighting alternative to traditional forms of lighting.

They don’t convert energy to heat

Most other forms of light, like incandescent and halogen bulbs, take a lot of energy to fully light up. This is because they convert a substantial amount of this energy to heat, which is not only a waste but is a safety hazard, too. The longer they’re left on, the hotter they’re going to get, which poses a great potential fire risk.

LEDs take a lot less energy to run because they convert most of it into light, rather than heat, which is what makes them so energy efficient. So, even if they get left on for a long time, they’re much less likely to become a fire hazard compared to other lighting alternatives. This makes them a lot safer to be used with paper or cloth lampshades and covers, too.

They run at a lower voltage 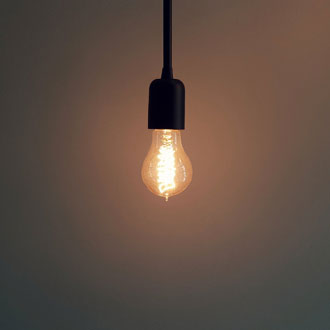 One of the biggest benefits of LED lighting is that they can run at a lower voltage than more traditional incandescent and halogen bulbs. Those that are plugged into the mains electrical supply usually have a transformer built in, which lowers the voltage to suit the light. This means there’s a much lower risk of electrical shock and fires if they’re left on or being changed.

They come in water resistant versions

Bathrooms and kitchens can often generate steam which creates moisture, and when this enters the lighting system, it can quickly cause a power outage or even a fire. Luckily, LEDs come in water resistant and waterproof versions which are suitable for kitchens, bathrooms and even outdoors.

When choosing your LEDs, it’s important that you consider the IP rating of your lights, which is the level of protection the light will have from water and debris. For bathrooms and kitchens, lights should have a minimum of an IP67 rating. For outdoors, an IP65 water resistant rating or an IP57 waterproof rating is advised.

They’re made from safer materials

Some other forms of lighting, like fluorescent lights, contain small amounts of mercury, which is what makes them light up. When electricity passes through the mercury vapour in the lamp, it sparks a short burst of ultraviolet (UV) light, which then causes a phosphor coating on the inside of the tube to glow. But mercury can be toxic if inhaled or ingested, which means if these lamps break at any point, they could be highly dangerous.

Because LEDs use an electrical conductor to pass along a charge, they don’t contain any mercury and are considered non-toxic. This means that, if they get dropped or broken, there’s no dangerous mercury to worry about.

Because of their low temperature, low voltage, waterproof versions and non-toxic materials, LEDs are a much better alternative to keep buildings and occupiers safe from fire and removes the risk of inhaling poisonous chemicals.