Our world is mostly built out of unsustainable materials. Bricks, concrete, steel, glass, and wood. All of these substances are practical and relatively cheap to produce which is why they are so popular (although the cost is rising), but there is growing concern over the long-term impact their production is having on the planet. It is estimated that the production of these building materials accounts for five per cent of all manmade carbon emissions — and nearly two-thirds of all the materials end up on a landfill site and are not recycled.

So perhaps it is time to look beyond the traditional materials that currently sustain the housing market. Here are five emerging sustainable materials that could be the bricks-and-mortar of tomorrow’s world:

Cement is perhaps the most ubiquitous building material of the lot, but there are problems with cement.

It is tough except when under strain, and is often married with steel to make it stronger. this steel-concrete partnership has generally been a massive success and has allowed architects to build structures their grandfathers could only have dreamed of. But there is still a big drawback. Cement is porous, meaning it lets water in that can rust the steel. Engineers at Rice University in Texas think they might have solved this problem. They have 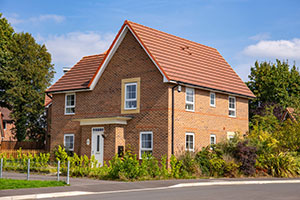 invented ‘programmable’ cement. By tweaking the molecular structure of the cement, they can influence how it sets. Traditional cement leaves lots of porous spaces between molecules, but programmable cement sets however way the engineers program it to.

The mass production of regular building bricks requires very hot temperatures and has been linked to soil deprivation. But now there may be another alternative: bricks that grow at low temperatures, and grow like coral does in the ocean. It sounds like science fiction, but scientists in North Carolina, USA, say they can ‘grow’ coral bricks by placing sand into rectangular moulds and then adding a secret ingredient: bacteria. The bacteria then ‘wraps’ around the sand particles and abet the growth of calcium carbonate crystals. The crystals, in turn, develop into stone-like substances that are just as tough as regular bricks.

If coral bricks ever become the norm, they will be much more eco-friendly to produce, as they do not require much energy or heat to make.  Buildings that ‘breathe’ In hot countries, air conditioning can be very expensive to run and energy draining. That’s why construction experts at Barcelona’s IAAC architecture school are working towards what they call ‘breathing buildings’, which could cut energy bills by a third.

The IAAC has built ceramic panel facades to go on the outsides of buildings. They call them ‘hydroceramics’. They contain what they call ‘hydrogel’, which is an insoluble polymer that can absorb 500 times its weight in water. The cooling effect comes when the hydrogel absorbs the humidity in a hot climate and then lets it evaporate. This is what the construction experts mean by ‘breathing’. As the collected water evaporates, the building ‘breathes’ and the temperature drops by as much as six degrees.

Engineers in the Netherlands (for a company called Aectual) are working on 3D-printed ‘bioplastics’. The printers are impressive on their own, as they are capable of printing off entire floors and facades of buildings, but their ‘ink’ all derives from 100 per cent renewable materials; including plant-based polymers and some recycled plastics.

This means that even if the printers make a mistake, the plant-materials can be destroyed and re-assembled again, so there is no waste.

Engineers in Canada have managed to produce cladding that forms in a similar way to the bubbly-chocolate bars you can buy in shops.  Most cladding today is limited to bricks, sheet metal, concrete, and plaster. But these chocolate-bar panels (named ALUSION panels by their creators at Cymat technologies) are made from injecting air and some ceramic particles into molten aluminium metal. This process sets to make a very strong, soundproof, and non-combustible cladding. Given that aluminium is highly recyclable, this new type of cladding looks promising if it can move society away from traditional bricks and concrete.

Conclusion: The beginnings of a greener, more sustainable world?

The traditional materials of today are not likely to go away and be replaced by tomorrow. But it is warming to see so many potential replacement materials in the works. If we are ever going to achieve equilibrium and housing sustainability on Earth, then such innovation should be encouraged and celebrated. We have a long way to go, but we are getting closer.

— Cameron Dean is metalworker and writer for Weldwide, a metal fabrication company that specialises in architectural steel. They are based in London, UK.