MacCulloch said that the lack of adequate housing is “to a great extent, a problem caused by the University and Colleges themselves in modifying existing student accommodation to make it ensuite, to make such rooms viable for the conference trade, to generate revenue. That has resulted in the amalgamation of rooms. So it is not a “natural” housing shortage.”

Geography Professor, Danny Dorling said “it is worth students today asking themselves if they could afford to live and work in Oxford in future, assuming that they secured a good job as a teacher or in a local private business. Students graduating in the year 2000 who wanted to stay living in the city or come back to work in it were in a very different situation back then.” 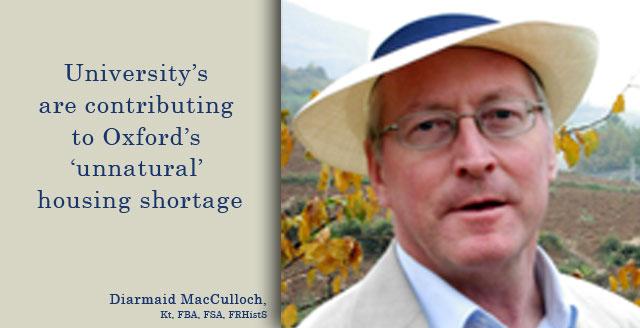 Recent statistics indicate that the cost of housing in Oxford is amongst the highest in the country. Oxford County Council stated “Oxford has overtaken London as the least affordable housing location in the UK. The average cost of buying a new house is more than 11 times the average salary of an Oxford worker.”

Oxford University disagree with accusatory statements that suggest they aren’t helping in the midst of a crisis. University spokesperson, Stephen Rouse responded “the University is unapologetic about trying to ensure students are provided with good quality accommodation. It is also a priority of the University to provide accommodation for as many students as possible to ease the burden on Oxford’s housing market.”

Many colleges in Oxford use their facilities to host conferences outside of term time, including New, Magdalen and Balliol. In total 213.2 million of the University’s income comes from sources outside of grants, fees endowment and donation. This income includes conferences. Balliol charges £138.50 per day per conference delegate staying in an en-suite room, inclusive of food, conference facilities and accommodation. New College charges £124.80.

MacCulloch says “you have to recognise that the conference train brings in an enormous amount of revenue for colleges, which benefits students and keeps their costs down.” The issues of housing, accommodation and conferences have also been high profile in Cambridge recently, with students launching a campaign entitled ‘Whose University?’ aiming to tackle “the distinct lack of clarity about who has ownership over college spaces.”

Oxford is internationally renowned city, held in high esteem for its quality of education, historical significance and cultural importance in the UK. However, the city's continuing housing crisis through the lack of housing availability, choice and affordability, is significantly undermining its future