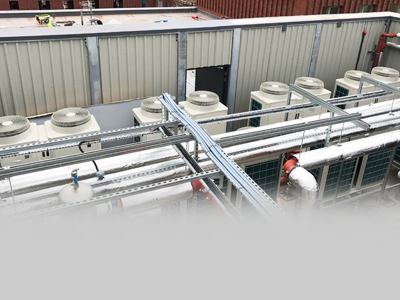 A brand new residential development in Manchester is meeting its environmental planning requirements thanks to an Ecodan system providing community heating to 105 new homes.

The Aaben is a modern development of 105 homes, all available for market rent, on Leaf Street in Hulme. Located just south of Manchester’s city centre, Hulme boasts a creative art scene, independent restaurants and cafes and a thriving local community.

The development itself is named after an old building dating back  to the 1920s which was situated close by until it was knocked down in 1993. For decades before it had served as a community cinema and, for a short time, a bingo hall.