In June 2017, a fire claimed 72 lives at Grenfell Tower in Kensington. Eleven months later, Dame Judith Hackitt, who was commissioned to determine the cause of the disaster, released a report featuring eight key recommendations to limit the chances of similar catastrophes occurring in the future. 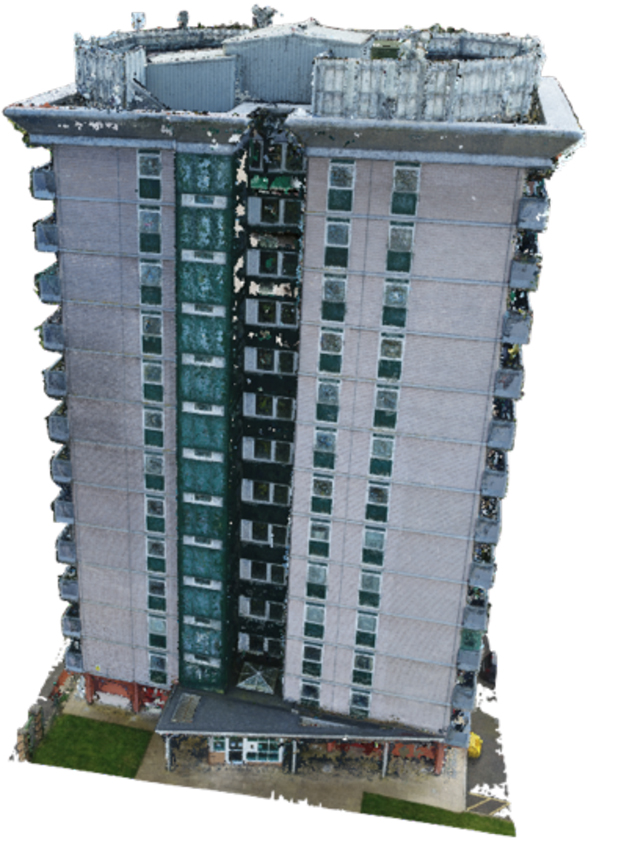 Those recommendations require building managers to keep digital building records, from the design and conceptualisation phase through its life cycle. With the boom years of High Rise Residential Buildings (HRRB) development between 1953 and 1972, and with 6544 buildings erected in the half-century following the end of World War 2, nearly all of the remaining 270 HRRBs were built in a pre-digital age.

Thus, in 2021, complying with new design regulations while creating new digital records for those HRRBs presents a major challenge.

For a number of years, surveyors used lasers for measuring and plotting. Over the past five years, that use accelerated in performance as manufacturers, such as Leica, produced highly usable, accurate automated scanners to remove most of the legwork. Now, capturing an entire structure simply involves placing a scanner and getting out of its way. When combined with the use of drones, they provide precise, photo-realistic mesh models, which provide stunning, highly functional digital records.

Recently, our team at Consortiq created a digital twin - 3D replica - of an HRRB in Manchester [1] by combining our expertise in drone operations, the 3D environment, and reality capture. Our goal was to prove that autonomous technologies provide accurate, actionable data, captured more quickly and at a lower cost than traditional methods.

In just one day, we captured the entirety of the outside of the building and the accessible interior communal areas.

Using an advanced drone platform carrying a high resolution camera, we recorded 6000-plus high-res images of the building from multiple angles, utilising real-time kinematics (RTK) to increase the positioning accuracy of each image. With an overlap of around 65-70% per image, we processed the images into a dense point cloud - a mass collection of common points in the overlap of images - to create a 3D Model.

For the interior, we used similar, yet more automated technology. Inside, without the ability to use GPS, the scanner utilises LiDAR to determine its location and piece together images for the 3D model.

Additionally, we combine a variety of sensors that balance ease of data collection with scanning detail. [2]

With a handheld scanner, we can quickly capture a large amount of information, but at a lower quality texture. We also utilise a high-fidelity terrestrial scanner - for enhanced visuals.

The output can be tailored by the customer, depending on which software systems you already use. Additionally, we provide managed software solutions if you don’t already use building information modelling (BIM) software.

Once recreated accurately in the digital environment, we’re able to utilise several tools to enable effective asset management. One technique is classification and object tagging for utilisation inside BIM software, such as Revit. For example, in the illustration above, we used red to indicate the doors, and blue for a fire extinguisher. These are now individual BIM objects, identifiable in Revit where you can tag them with asset information, such as manufacturer, installation date, and inspection dates.

Also, we take detailed, accurate measurements (average 1.5mm accuracy), so you’ll no longer need as many in-person assessments for maintenance work and therefore will save considerable time.

In example [3] - an interior scan prior to processing - we used a simple tagging technique to associate an asset’s information against it visually. This allows for a visual representation of your asset database, reducing errors by servicing or referencing incorrect assets.